Mr Wicked comes in for a lot of comment from the general public. From a skin-and-bones little terror who would not make eye contact, he has grown into an extremely handsome beast of sleek muscle, who, like Kim, is willing to be the little friend of all the world. 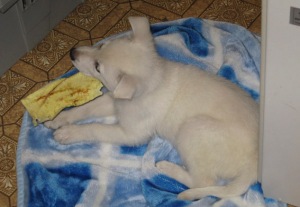 Tiny Ivan putting his teeth to good use.

Pippin used to get a lot of attention too, being famous, but he hated the paparazzi. People who knew someone who knew us would come over with cameras and small children, wanting to take the children’s pictures with “the Real Pippin”. Pippin, who did not especially like strangers or children of any size, but who was the most amazingly gentle and patient dog, would sit, looking stiff and martyred, while the small children stood nervously beside him. They never expected the Real Pippin to look quite so much like a large yellow wolf, and it daunted them.

Pippin would perform some sort of Zen meditation, or perhaps tell himself, “I’m not really here; they’re not really here; soon they’ll go away,” while they patted him. Once, at a family dinner, we discovered Number One Nephew had disappeared. He was discovered under the dining room table, face to face with Pippin (who had retreated there for safety), showing him the pictures in Pippin and the Bones. Pippin was politely following Nephew’s pointing finger, a dignified elder. He accepted the nephews as family, if unaccountably small and noisy specimens.

Mr Wicked enjoys posing for photos, though he hates staying still. He’s one of those very busy dogs. Zen meditation is not covered in his approach to life. A human sitting at the computer is a human who needs to be entertained. Perhaps she would like to play the chase-the-dog running-away-with-the-couch-pillow game? Oh. Well, perhaps she’d like to play the chase-the-dog-running-away-with-her-slipper-game? No? Maybe now she wants to play chase-the-pillow? Human continues to sit grimly at computer. Mr Wicked returns, carrying trophy. Hey, I’m being bad. You’re supposed to chase me. I went to all the trouble of stealing this to entertain you; aren’t you going to come get it? Human ignores him. Drop pillow. Sigh in martyred manner. Lie down in funk. Human, guiltily, retrieves pillow and takes dog for walk.

Posed and elegant. Probably plotting some evil scheme to keep the human from getting bored.

The author of Blackdog, The Leopard, The Lady, Gods of Nabban, and The Last Road epic fantasies from Pyr, I also write for teens and children, including the "Torrie", "Warlocks of Talverdin", and "Cassandra Virus" series, and the "Pippin and Mabel" picture books, as well as a couple of short story collections and two works of adult literary criticism on the history of children's fantasy literature. I have a Master's degree in Mediaeval Studies, and read a lot of fantasy, science fiction, and history. Blog at thewildforest.wordpress.com
View all posts by K.V. Johansen →
This entry was posted in dogs and tagged dogs, Pippin and Mabel books, writing. Bookmark the permalink.