However, cold, wet, grey May notwithstanding, I think I may have had some success with my apple grafts this year. Possibly it was because of the cold, wet weather, which may have given my somewhat-late grafts a good long chance at growing together with the root-tree, rather than baking in sudden sun. Not, mind you, that I’ve had anything like the fifty-percent success rate of the professionals at Corn Hill. I put three or four grafts each of Russet, Northern Spy, and the much-desired Baldwin on three of my “grafting trees”, battle-scarred veterans of many seasons of failed grafts and failed Jones-budding. The Russet and the Baldwin, alas, are looking pretty dead and dry, but at least one, possibly two, of the Northern Spy twigs look as though their buds are opening. 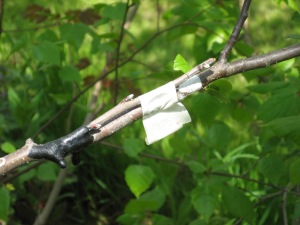 I’m fairly confident of it, enough that I’ve given the tree its own copper label, proclaiming, “Northern Spy, 2011”. I wish I’d thought of dating my trees earlier. I don’t know how old the other successful graft, the Bishop’s Pippin, actually is. It is blooming this year, for the first time.

The Bishop's Pippin in bloom for the first time

It would, no doubt, be a much happier tree (as would all the orchard and arboretum), if I didn’t keep pruning and root-pruning it, trying to keep it small enough to move when that gladsome day comes and we have a house and land of our own.

My two trees from Corn Hill, the Bramley (apparently on standard rootstock), and the Cox’s Orange Pippin (on dwarf), are also blooming this year. The Cox’s Orange Pippin seems to be later than all the rest. I have not yet bestirred myself to look into traps for the railway worm (apple maggot) flies. Since the blossoms on all but the Cox have opened, it’s probably too late for this year.

Here are a few interesting sites about historic apple varieties:
In Canada, Corn Hill. In the UK, Buckingham Nurseries. In the US, All About Apples (a database, not a nursery).

And, at last, it’s Junebug season. This is an important event in the canine year. Flying, sweet, crunchy snacks, which can be snatched from the air or swatted down, or, the less challenging ones, snapped up as they potter along the ground. From the way dogs go after them, I somehow imagine Junebugs tasting something like chocolate and bacon. Pippin used to dig up the grubs. Actually, when I was gardening and failed to unearth any grubs for him, Pippin would eventually come over and sniff my mouth very carefully, to make sure I wasn’t secretly eating them all myself. He didn’t understand that like any other garden crop, there were good and bad Junebug years.

Ivan turns his nose up at the grubs (no crunch), but is an avid hunter of the adults. This looks like being a good Junebug year, if last night is any indication. (The glowing collar, by the way, is two cyclists’-light-bands from Mountain Equipment Co-op clipped together, very useful for a white dog on snowy nights. The light is actually red.)

Postscript: June 9 – It looks like the Northern Spy graft has withered in the bud. The buds did start to open, but rather than withering, have suddenly rotted. Alas. So my solitary grafting success remains the Jones budded Bishop’s Pippin, which has already set fruit.

The author of Blackdog, The Leopard, The Lady, Gods of Nabban, and The Last Road epic fantasies from Pyr, I also write for teens and children, including the "Torrie", "Warlocks of Talverdin", and "Cassandra Virus" series, and the "Pippin and Mabel" picture books, as well as a couple of short story collections and two works of adult literary criticism on the history of children's fantasy literature. I have a Master's degree in Mediaeval Studies, and read a lot of fantasy, science fiction, and history. Blog at thewildforest.wordpress.com
View all posts by K.V. Johansen →
This entry was posted in dogs, Life and tagged apples, Bishop's Pippin, dogs, grafting, grafts, historical apple varieties, Jones budding, Junebugs, Northern Spy. Bookmark the permalink.