It’s all very well for these British authors who seem to sit about in summerhouses writing. They don’t have deerflies in the UK, or our quantity of other biting insects (mosquitoes, blackflies). In fact, it seems when things are biting, it calls for special mention, as in the Midgewater Marshes in LR. (I was quite appalled when I first lived in Germany and discovered they had no window screens, but nothing ever came in to whine around my ears at night, and it did explain why heroic children could spend so much time climbing out of windows for adventures. Try doing that with an aluminum storm on it!) Anyway, sitting outside to write is not really feasible here on the Midgewater — I mean the Tantramar, where we have saltwater mosquitoes from May to October. Even along the St. John River, where we sometimes get to visit someone else’s cottage, there is a progression through several generations and species of mosquitoes, through the great blackfly upsurge in June, to the deerflies of July and August. Writing en plein air is just not on.

Dawn on the Saint John -- you can't see the deerflies

And then I thought, ENOUGH! And I spent my hoarded birthday money on what I call a dining shelter (because that’s what we had when I was young and we went camping for weeks on end) and what the hardware stores now call a screen house. That being a very large purchase for me, even though I had to buy the absolute cheapest level available, I spent ages reading reviews on-line. Far too many of the reviews seemed to consist of “Falls apart if taken out of box”, which was not encouraging. Why, oh why, don’t they make them out of real stuff any more? What is all this easily shattered “composite” nonsense the poles are made of? Then I found one that looked the exact shape of the tent and the dining shelter that saw my family through so many summers and storms. Aha! I thought. There were no reviews, but at least it was made by World Famous, which has been around for a while. I trundled down to my local Home Hardware and discovered they had none, and in fact there were only two in the Warehouse. This was said with a wary emphasis that suggested to me that there was only one Warehouse for all Canada. (May or may not be true.) “Order me one, forthwith!” I cried. (Well, okay, not in those exact words.)

The screen house/dining shelter, when it arrived, proved to be of modern materials (I like things I can patch), but they all are these days. The roof is the sort of plastic-y stuff that tent floors used to be made out of, back when tents were still made mostly of real canvas. The screen is, I fear, perhaps not blackfly-proof, being of a wider mesh than window-screen. (We’ll find out next June.) But, the poles are steel, and go through loops, and will last, and are in no danger of shattering if taken out of their box, and screens can be patched and the plastic-tarp roof can be covered with a tarp fly to protect it from UV and, all in all, I think this is absolutely the best hundred-dollar screen house I could have gotten. 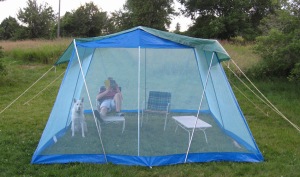 The Spouse and Mr Wicked consider whether my bowline knots on the fly will hold.

It also came with useful instructions on how to waterproof your tent. Clearly, the design dates back to the days of canvas, and the factory in China that now makes the things has been faithfully including these instructions since the canvas days. However, I feel that spraying it with a hose for at least ten minutes is likely to do little to shrink its seams tight, so I omitted that step. Reading that, though, I could smell slightly damp, slightly mildewy, waterproofed canvas, and jack-pines.

It stands up to high winds, too, as we had a fairly violent wind and thunderstorm come down the valley while we were sitting in it. It flapped and creaked and Mr Wicked leapt to his feet, looking at us for signs that it was time to panic, but the tent stayed up. (I expected it to — our old family tent never fell, even when camping in northern Newfoundland.) Perhaps more impressively, the bowlines I had tied on the tent fly held, and my tarp (which I found in a field some years ago – next birthday I’ll get one that’s actually large enough to give us some eaves and extra shade) did not go flapping away to continue its peregrinations. 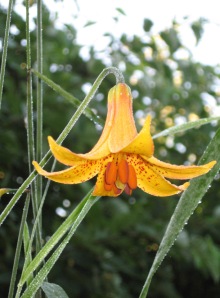 A Canada Lily in bloom by the Saint John.

So, I was able to spend several days sitting outside, writing in bug-free and UV-free and even rainshower-free comfort. Very relaxing, well worth the money, and Mr Wicked, who believes that hitting doors makes humans open them, has learnt to nuddle the flap with his nose when he wants a human to unzip it and let him out, rather than clawing it. Mr Wicked definitely approves of the tent. It makes the humans come outside and lounge around, which is his idea of the proper way to spend the day, rather than lurking in dark rooms. All in all, the pack is pleased with its new acquisition. The Spouse, though, looking thoughtful, has uttered those inevitable words: “You know, this really needs a bookshelf.”

The author of Blackdog, The Leopard, The Lady, Gods of Nabban, and The Last Road epic fantasies from Pyr, I also write for teens and children, including the "Torrie", "Warlocks of Talverdin", and "Cassandra Virus" series, and the "Pippin and Mabel" picture books, as well as a couple of short story collections and two works of adult literary criticism on the history of children's fantasy literature. I have a Master's degree in Mediaeval Studies, and read a lot of fantasy, science fiction, and history. Blog at thewildforest.wordpress.com
View all posts by K.V. Johansen →
This entry was posted in dogs, Writing and tagged dining shelter, mosquitoes, Saint John River, screen house, tent, World Famous, writing. Bookmark the permalink.