Tallying the Books 2: The Serpent Bride

The Serpent Bride, my second published book, was a collection of ten short stories that were literary fairy tales, retellings of ballads from Medieval Denmark, was published in 1998 from Thistledown Press. (For non-Canadians, that’s a venerable small literary press out west.) I started off reading Victorian or early twentieth-century translations of some of these but then switched to reading the originals. Since my Danish is limited to God/Glaedelig Jul, Ja, Nej, Bedstefar, Rødgrød med fløde, and Tak for kaffe, this was a slow process. However, I’ve studied languages and around the same time had begun a correspondence with a great-uncle who had no English, so for a while there my (non-oral) Danish was improving. I choose to use some of the weird Victorian Anglicizations of names that I found in one collection, though — now I have no idea why. That’s something I’d definitely do differently if I were writing these again. I mostly stuck to the plots as given in the ballads, aiming to give flesh, bone, and blood to the sketches of the characters found in ballad form. I left my dragon-prince a shapeshifter, though, rather than under a curse. Had to get one voluntary shapeshifer in there, at least! 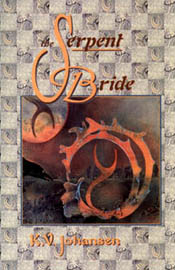 One significant change I made for the published version was to write a victorious ending for the hero of “Germand Gladensvend”; after defeating the troll and tearing it to bits — as she does in the original — she finds her husband alive. In the original version she only finds his hand. I wrote a version that ended like that, too, which I quite liked, but decided one tragedy among nine triumphant love stories was going to be jarring.

Why did I set out to write these? I have no idea; I have no memory of deciding to do it. It wasn’t that I came across a Danish ballad and thought, I’d like to retell this story. I don’t remember it being an idea at all; there’s just a point in my memory where that was what I was working on. Strange.

I still quite like them; as in the originals, they’re stories about forthright young women going out to solve their own problems — even if that means finding a knight to kiss you to break a curse, you can still take charge of the situation. They have a bit of quirky humour — some of it mine and some of it, like the nun wishing ‘God would send her such an [implied – sexy] angel’ original to the ballads. They’re stories for all ages, as folk or fairy tales always have been. Good fun, if I do say so myself, both to write and to read.

The author of Blackdog, The Leopard, The Lady, Gods of Nabban, and The Last Road epic fantasies from Pyr, I also write for teens and children, including the "Torrie", "Warlocks of Talverdin", and "Cassandra Virus" series, and the "Pippin and Mabel" picture books, as well as a couple of short story collections and two works of adult literary criticism on the history of children's fantasy literature. I have a Master's degree in Mediaeval Studies, and read a lot of fantasy, science fiction, and history. Blog at thewildforest.wordpress.com
View all posts by K.V. Johansen →
This entry was posted in Twenty Years of Books, Uncategorized, Writing and tagged Danish ballads, Denmark, dragons, fairy tales, folk tales, literary fairy tales, mediaeval, medieval, shapeshifters, short stories. Bookmark the permalink.